In this article, we will be examining and comparing the two most popular approaches to making ice water hash, bubble hash or Ice-O-Lator from cannabis buds: In the first two extractions, we will be using fresh-frozen material to make the hash, while the second two extractions will be carried out using dried, cured flowers.

The goal of this experiment is to examine the differences in both yield and quality between these two approaches and determine the pros and cons, as each one has its advocates and detractors. Many hash-makers claim that processing fresh-frozen plant material offers greater yields and higher terpene content, while others maintain that using dried material results in a more stable and longer-lasting product, less prone to degradation over time. The fresh-frozen approach can also be useful if you don't have sufficient time or space to hang and dry your plants, but dried flowers will occupy less volume in the freezer than fresh-frozen material, being less bulky and heavy.

To make sure that the comparison between the two different extraction methods is as fair and even-handed as possible, the flowers we will be comparing are from the same plants, two different phenotypes of the variety R-Kiem from Spanish seed bank R-Kiem Seeds, specialists in breeding genetics highly suitable for extractions. Each plant was processed separately both in its dried and its fresh-frozen form, meaning a total of four different extractions for comparison purposes.

Both plants were grown outdoors in full sun and the flowers were collected when fully mature toward the end of October.

The same equipment and techniques are used when processing fresh-frozen or dried material, the only difference being that dried flowers will need to be rehydrated before starting the extraction. This is to ensure a cleaner end product, avoiding any contamination of the hash by plant debris that could result from agitating dry and brittle flowers. It's usually enough to let the material soak in ice-cold water for around 20-30 minutes before proceeding with the extraction process.

Here we'll just share a few details of the extraction, but for a much more in-depth guide on making your own bubble hash, read our other article on the subject: How to make ice water hash.

In this case, the material was processed in a medium-sized portable washing machine, but smaller and larger machines are available depending on your need. Hand-stirring in a bucket is a perfectly viable option for smaller quantities or if you don't have a washing machine.

Various types of quality and sizes of filter bags are available for making hash, but for this project we used a 5-bag set of Pure Extract Bags to filter the water and separate the vegetable matter (220) and the different sizes of trichome heads by micron size from (160>120>73>25). The use of a 220 micron zip-close work bag inside the machine can be a useful idea to save time and mess, while some may prefer to wash the material loose, thus allowing it to circulate freely in the water. It's a personal choice and experience will show which works best for you.

For each of the four extractions, we carried out multiple washes in order to separate the maximum amount of resin from the material; first we ran the washing machine for three minutes before draining, separating and collecting the trichome heads, next we washed for six minutes, then nine, 12 and finally 15 minutes each for the last few washes, until the temperature of the water rose above 1ºC and the quality and quantity of the resin collected visibly declined and we decided further extraction wouldn't yield much of any worth.

After collection, even at an ambient temperature of 10ºC the resin (in particular that of the fresh-frozen material) was far too sticky too break up for drying, so it was transferred to the freezer for a few days to harden it before we micro-planed (grated) it into a powder, thus facilitating drying, which took place in a fridge over the course of two weeks. After another week in a relatively dry, cool room (50%RH/10ºC), the hash was collected for storage in glass jars, the ideal moment to weigh, evaluate and compare the results of each of the different extractions.

While we were unable to weigh the now dry buds while they were still in their freshly cut state, as a general rule fresh material will lose around 70-75% of its weight in moisture as it dries. So, with this experiment, we can expect the hash yield to reflect this, with dried buds giving a higher yield percentage by weight than the fresh-frozen material. 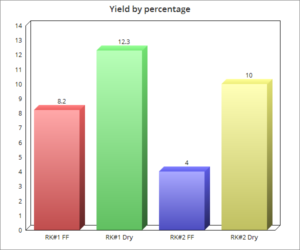 This theory was proved to be correct once the dried hash samples were weighed and recorded, as illustrated in this chart, which shows a clear difference in yield between the fresh-frozen and dry material, with the dried flowers delivering approximately twice the return by weight.

However, by adjusting the results to take into account the weight of water lost by drying the buds, we can get a much clearer and more balanced idea of the actual return obtained from the material used. In this case we assumed a weight loss of 70% in the process of drying the flowers, so we reduced the weight of the fresh frozen material accordingly in our calculations to arrive at the figures in the chart on the right, where we can clearly see a spectacular yield from the fresh-frozen extraction of  R-Kiem #1, almost double the yield of R-Kiem #2. We can also see that there's very little difference between the yields achieved using the dry material of both plants.  So now we know the relative yields, but to properly contrast and compare them, next we'll have to look at the quality of the hash produced.

As we've seen, over the two plants the fresh-frozen extraction yielded more weight, but what the charts don't show us is that it also produced a considerably higher quality and more flavourful resin than the dried material, with the first few washes having a notably lighter colour, and much more of a greasy texture, while later, during the necessary "field tests" the dried, cured hash from the first wash fully melted to liquid when heated on an electric nail at 260ºC, leaving virtually nothing after evaporation, while even the very best grades of the hash made with the dried flowers left behind a small amount of residue when melted on the nail.

Summing up the quality, by far the best results came from the first few washes of the fresh-frozen material, which produced a hash of truly superior quality, while in general the extraction from the dried, uncured flowers produced resin of a slightly lower grade, but that remained more consistent in quality over multiple washes, not deteriorating and releasing chlorophyll as fast as the fresh-frozen material does.

Other factors to consider

As a personal preference, in the majority of cases, these particular hash makers prefer to work with dried, uncured flowers, but occasionally, with certain, special plants, we’ve found that fresh-frozen material can deliver spectacular results both in quality and weight, but it depends on certain factors.

In our search for hash producing phenotypes, after we've selected plants based on the usual criteria of ease of growth, structure, aroma, effect, yield, etc, then the selection process is all down to how much, how easily and how quickly the flowers will give up their trichomes during washing.

In our experience, most plants will need several washes to get to the point where we feel like we’ve removed the vast majority of the resin heads off the flowers, and we’ve found that as a general rule (of course, there are always exceptions) dried flowers will hold up better and produce cleaner resin over multiple washes, while fresh-frozen material can degrade quickly, releasing chlorophyll as it defrosts during washing, and lending an unattractive green tinge to the resulting hash. A great example of this is our cup-winning cut of Tropical Snow from Danish seed bank Zen Seeds, a plant that produces massive yields of full-melt quality hash up to and beyond the eighth wash when using dried flowers, but when using fresh-frozen material, only the first and second washes are anywhere near the quality we're looking for.

On the other hand, one occasionally finds plants that are capable of dropping almost all of their trichomes in the first wash, making a second wash a mere formality. We once had an incredible, now sadly lost phenotype of Blue Cheese from Barney’s Farm that did just that, and with incredible aroma flavour and effect too. Plants like this are, in our opinion the perfect plants for fresh-frozen water hash, giving blonde, terpene-rich, top-shelf extracts and impressive returns with very little washing, before the material has any chance of defrosting and contaminating the hash.

Selection is the key

If this experiment has shown us anything, it’s that the plant material itself will dictate the best way to extract, and it’s really only by trying and testing that we are we able to uncover this knowledge. As we’ve seen with here, there can be notable differences even between phenotypes of the same plant, with the R-Kiem #1 giving almost 100% more yield than R-Kiem #2 in fresh-frozen, but only 23% more with dry material. Not only that, but the #1 phenotype also released almost no chlorophyll during the fresh-frozen extraction, giving a beautiful light-coloured resin, whereas the extraction using dried material of the same #1 plant was visibly darker, having taken on some vegetable matter at some point during the process. And, just to prove how important hash making is for plant selection, and vice-versa, the #2 phenotype behaved in exactly the opposite way, the dried material produced a much cleaner result than the fresh-frozen extraction, from which the third wash and all subsequent washes were, in our view, far too green in colour.

So, at the end of this particular experiment, we’ve seen that from two plants of the same strain that were very similar in appearance, aroma and flower yield, we achieved quite contrasting results from each different extraction process, with R-Kiem #1 being better suited to fresh-frozen hash making, and R-Kiem #2 better suited for extractions using dried material. However, given the considerably higher yields and superior quality obtained by R-Kiem #1 in the fresh-frozen extraction, in this case, we would definitely be keeping a mother plant of that particular phenotype in order to provide clones for future cultivation with hash-making in mind.

We'd like to encourage you to do the same thing, get your hands on some great seeds and pheno-hunt a great hash plant for yourself, it’s a highly rewarding process and besides, carrying out a thorough assessment and "field-testing" the results with friends is a lot of fun too!

How to make ice water hash

How to make hash with CO2 or dry ice

We must temporarily close our phone service due to the current exceptional circumstances. You can contact us at info@alchimiaweb.com
keyboard_arrow_up